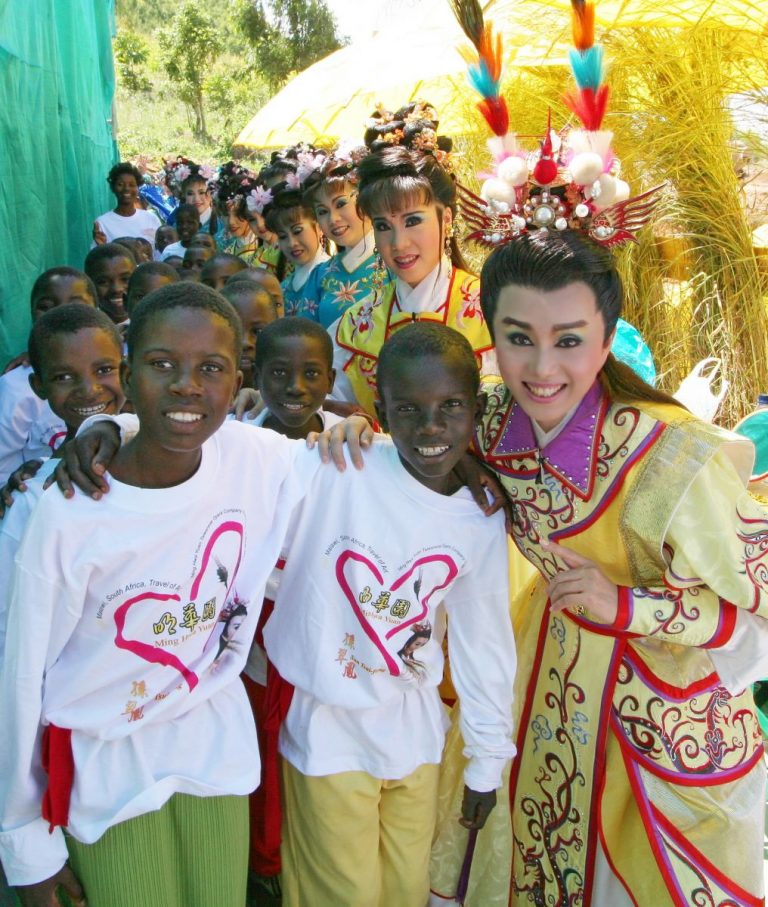 I think back to my relationship with Master Hui Li more than ten years ago where I spent a week living in Africa. Since then, I have forged an indissoluble bond with this group of African children. Eating with them, living with them, experiencing the inconveniences of life together. Taiwanese children who grow up in comfortable living environment would not able to relate to these conditions.  It is challenging to care for the disadvantaged children. I am touched by Master Hui Li’s dedicating his life to help the African children.   This may be the fate of Master Hui Li’s “strong will”, but without his courage and perseverance, where would these children go?

I still remembered the few days in Africa, where I taught the children living there the movement and singing of the Taiwanese opera (gezaixi). Watching them practicing seriously, I had a sense of admiration for them. In the following years, the tutors would learn from the opera CDs sent to them,  and they would teach the children accordingly.  They toured Taiwan to showcase what they have learnt, and I accompanied them to help in the publicity. Seeing a group of African children speaking Mandarin, singing opera, and even speaking a few words in Hakka dialect, I felt that education transcends all that Buddha dharma has touched them.  What was particularly impressive was the Centre’s focus on the development of the children’s moral education.  The children were taught well in performing their daily chores.

We are grateful for Master Hui Li’s efforts and hope that all of you could pool your resources in helping more children in Africa to receive education and care.  Fate comes to us in just that split moment, and let’s grab it!

In 2006, after her performances in South Africa, Madam Sun was reportedly “tricked” to do charity shows in Malawi.  During that period, Madam Sun visited orphanages, staying with them, and seeing the helplessness of the children.  She also saw Master Hui Li taking care of many abandoned and sick AIDS orphans with limited resources.  It was a tough road for Master Hui Li, and his actions were felt by the local Chinese community and they joined in to help.  Madam Sun also participated in the foster care initiative.

In August 2008, thirty-two children from the Malawi ACC went to Taiwan to perform and fundraise.  At the same time, Ming Hwa Yuan Arts and Culture Group was also touring across Taiwan, where Madam Sun was performing.  Upon recommendation, Madam Sun assumed the position of Honorary Chief Executive Officer of the Amitofo Care Centre Association.  Madam Sun said at that time:” Even though administrative work is not my area of expertise, if I could contribute in whatever means, I will do it so as to encourage others to help out too”.

When the performances of Ming Hua Yuan and the ACC Malawi were going at the same time, Madam Sun was sacrificing her energy and time in fundraising for the ACC.  The performance at Daan Forest Park was a huge success, where Madam Sun and her young African disciples shared the same stage together.  The atmosphere was electrifying.  The 32 children were also opening acts for some of Ming Hua Yuan preforms.  Troup leader Chen Sheng-Fu would introduce them as children from the ACC Malawi, creating awareness of the works of ACC.

Below are photos of Madam Sun’s charity performance in Malawi in 2006, and with the children when they performed in Taiwan in 2008. (from Sun Tsui-Feng official blog)